Will the Autonomous Truck Replace Truckers? 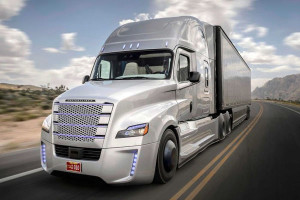 Autonomous trucks are coming closer to reality, and some truck drivers are (quite understandably) frightened by the idea of a self-driving truck. After all, if big rigs can literally rive themselves, what need is there for a truck driver?

Technology is in almost every sense a good thing. It provides us opportunities to replace the tasks we used to toil in and makes them simpler, faster, and more efficient to complete, leaving us time to explore other endeavors.

But with technology comes uncertainty as to some of the practical applications of the technology. In years past factory workers feared automation would replace human labor and fought its implementation (that of course did not prove to be the case).

And the recent introduction of the Inspiration truck from Freightliner and Daimler, drivers really began to worry. Inspiration’s main feature is a system called “Highway Pilot,” using a system of stereoscopic cameras and radar sensors that allow the truck to operate independent of a driver’s control, staying between lane markers, adjusting speed, and maintaining a safe distance from other vehicles on the road. This innovation has led to some calling Inspiration the first “self-driving” truck.

Feeling threatened that their jobs could be replaced by a machine, many truckers turn their questions into worry.

So how about it? Will the so-called “self driving” tractor trailers make the human truck driver obsolete?

Don’t count on it.

An article on CNET called “4 Things you should know about Freightliner’s self-driving truck,” author Antuan Goodwin says the “the human driver is still the most important element,” saying the driver is still very necessary. While the truck is capable of what Freightliner officials call “an advanced cruise control,” the driver retains control over the vehicle.

Instead of being designed to take jobs away from real people, the Inspiration’s real goal is to be a tool for the driver. Designed to reduce accidents, Inspiration allows the driver to be “distracted in a safe manner” while the truck’s camera and radar system keep the vehicle in its lane and away from other vehicles on the road.

But, Goodwin writes, “There’s yet still a lot of important driving for the driver to do. This includes negotiating surface roads, exits and interchanges, and everything else that’s not highway cruising.” Also, Highway Pilot mode does not support driving when road conditions are hazardous (such as when there is snow on the ground), and cannot maneuver in tight spots like loading bays.

So before you begin forecasting doom and gloom for truck drivers, consider that the “self-driving truck” is only a partially accurate statement, and that the technology is still not quite to the point where human drivers are obsolete. Nor, does it seem, that that fact will change any time soon.

By clicking the “Continue” button, I give Hamrick permission to contact me only about their programs using the above phone number and email address. Hamrick never shares or sells your information. Clicking “Continue” is not required to apply or enroll. Simply call our School directly.

Our Programs Financial Aid Our Location